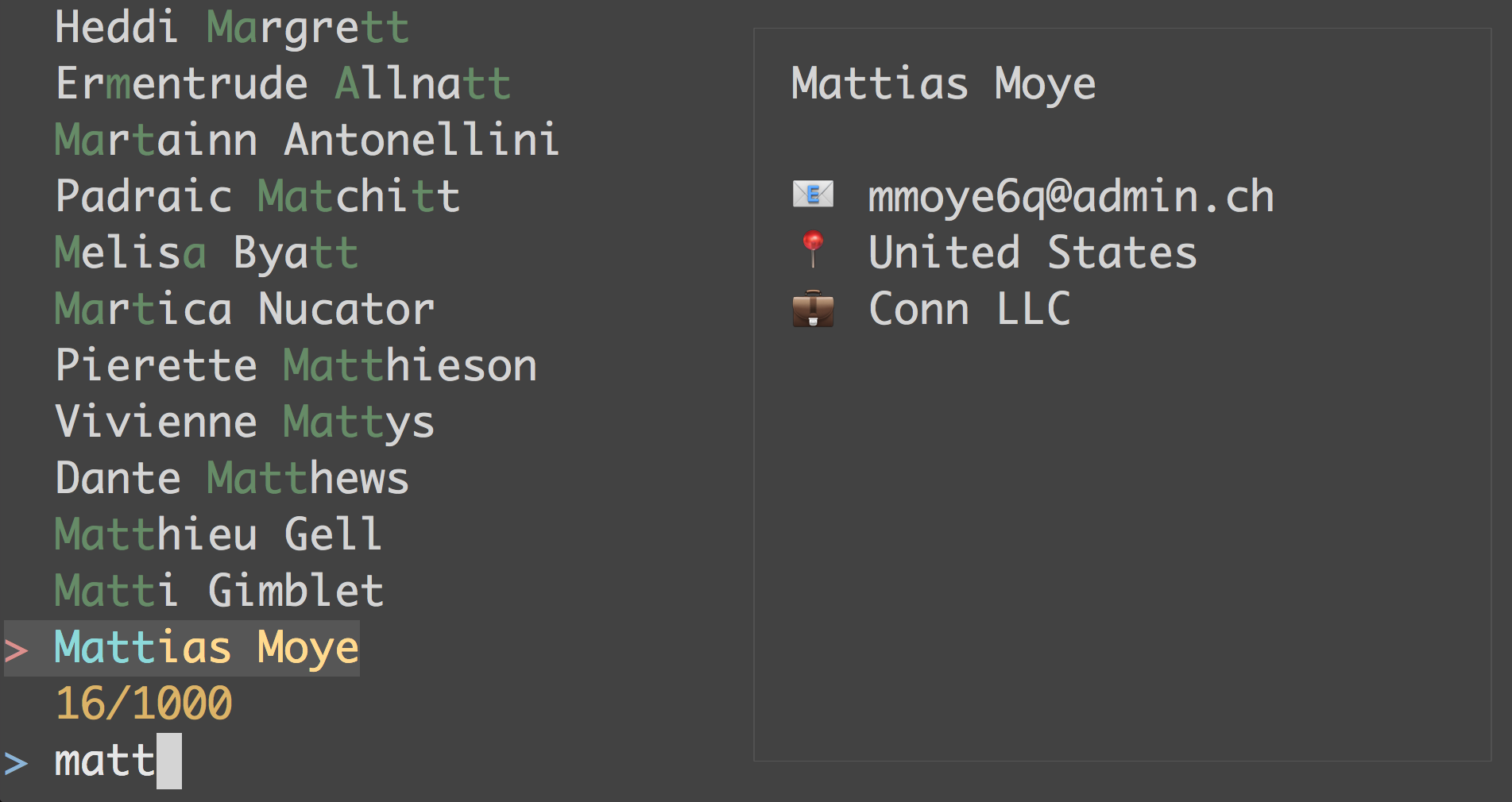 This is an example of FindMulti.

Fuzzy-finder command-line tools such that fzf, fzy, or skim are very powerful to find out specified lines interactively. However, there are limits to deal with fuzzy-finder's features in several cases.

First, it is hard to distinguish between two or more entities that have the same text. In the example of ktr0731/itunes-cli, it is possible to conflict tracks such that same track names, but different artists. To avoid such conflicts, we have to display the artist names with each track name. It seems like the problem has been solved, but it still has the problem. It is possible to conflict in case of same track names, same artists, but other albums, which each track belongs to. This problem is difficult to solve because pipes and filters are row-based mechanisms, there are no ways to hold references that point list entities.

The second issue occurs in the case of incorporating a fuzzy-finder as one of the main features in a command-line tool such that enhancd or itunes-cli. Usually, these tools require that it has been installed one fuzzy-finder as a precondition. In addition, to deal with the fuzzy-finder, an environment variable configuration such that export TOOL_NAME_FINDER=fzf is required. It is a bother and complicated.

Note that, all functions are not goroutine-safe.

itemFunc receives an argument i, which is the index of the item currently selected.

Find returns ErrAbort if a call to Find is finished with no selection.

FindMulti is nearly the same as Find. The only difference from Find is that the user can select multiple items at once, by using the tab key.

WithHeader enables to set the header.

WithHotReload reloads the passed slice automatically when some entries are appended. The caller must pass a pointer of the slice instead of the slice itself.

WithMode specifies a matching mode. The default mode is ModeSmart.

If f is nil, the preview feature is disabled.

WithPromptString changes the prompt string. The default value is "> ".

TerminalMock is a mocked terminal for testing. Most users should use it by calling UseMockedTerminal.

UseMockedTerminal switches the terminal, which is used from this package to a mocked one.

UseMockedTerminalV2 switches the terminal, which is used from this package to a mocked one.

GetResult returns a flushed string that is displayed to the actual terminal. It contains all escape sequences such that ANSI escape code.

SetEventsV2 sets all events, which are fetched by pollEvent. A user of this must set the EscKey event at the end.