This is a golang Kademlia/Bittorrent DHT library that implements BEP 5.

It's typically used by a torrent client such as Taipei-Torrent, but it could also be used by a standalone DHT routers, or for other more creative purposes.

The DHT performs well and supports the most important features despite its simple API.

A multi-node deployment is able to process more than 5000 incoming packets per second in a single core of a very old AMD Athlon(tm) 64 Processor 3700+, when the optional rate-limiting feature is disabled. 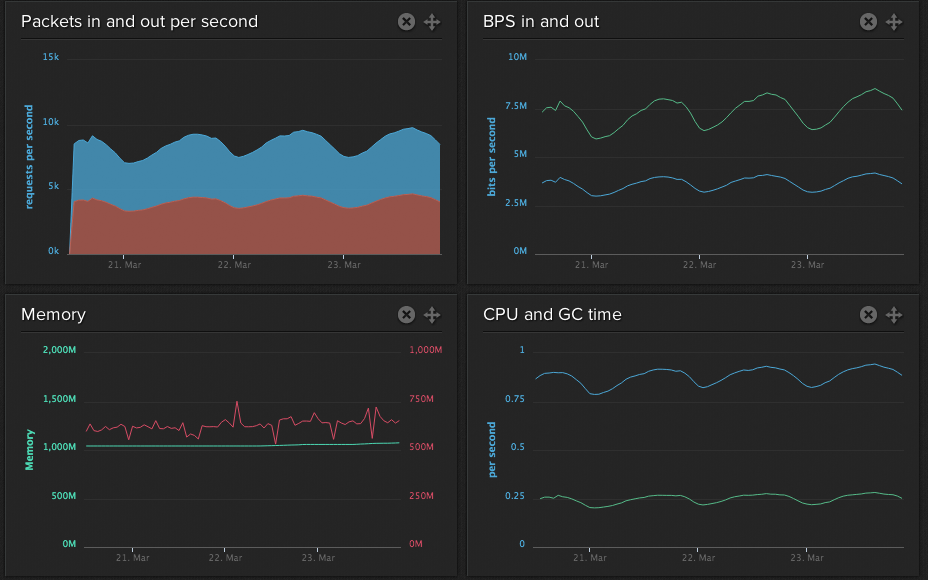 By default, if left running for several days the DHT node should use approx. 30MB of RAM. This can be adjusted by changing MaxInfoHashes and MaxInfoHashPeers accordingly.

For usage details, see the online documentation at: http://godoc.org/github.com/nictuku/dht

A full example is at: find_infohash_and_wait

DecodePeerAddress transforms the binary-encoded host:port address into a human-readable format. So, "abcdef" becomes 97.98.99.100:25958.

Config for the DHT Node. Use NewConfig to create a configuration with default values.

DHT should be created by New(). It provides DHT features to a torrent client, such as finding new peers for torrent downloads without requiring a tracker.

New creates a DHT node. If config is nil, DefaultConfig will be used. Changing the config after calling this function has no effect.

AddNode informs the DHT of a new node it should add to its routing table. addr is a string containing the target node's "host:port" UDP address.

PeersRequest asks the DHT to search for more peers for the infoHash provided. announce should be true if the connected peer is actively downloading this infohash, which is normally the case - unless this DHT node is just a router that doesn't downloads torrents. The infoHash added to the store can be deleted with RemoveInfoHash method.

PeersRequestPort is same as PeersRequest but it takes additional port argument to use in "announce_peer" request.

Port returns the port number assigned to the DHT. This is useful when when initialising the DHT with port 0, i.e. automatic port assignment, in order to retrieve the actual port number used.

RemoveInfoHash removes infoHash from local store. This method should be called when the peer is no longer downloading this infoHash.

Run launches the dht node. It starts a listener on the desired address, then runs the main loop in the same go routine. If initSocket fails, Run returns with the error. If initSocket succeeds, Run blocks until d.Stop() is called. DEPRECATED - Start should be used instead of Run

Start launches the dht node. It starts a listener on the desired address, then runs the main loop in a separate go routine - Start replaces Run and will always return, with nil if the dht successfully started or with an error either. d.Stop() is expected by the caller to stop the dht

DecodeInfoHash transforms a hex-encoded 20-characters string to a binary infohash.

Logger allows the DHT client to attach hooks for certain RPCs so it can log interesting events any way it wants.