The easiest way to get a production grade Kubernetes cluster up and running.

We like to think of it as kubectl for clusters.

Can I see it in action? 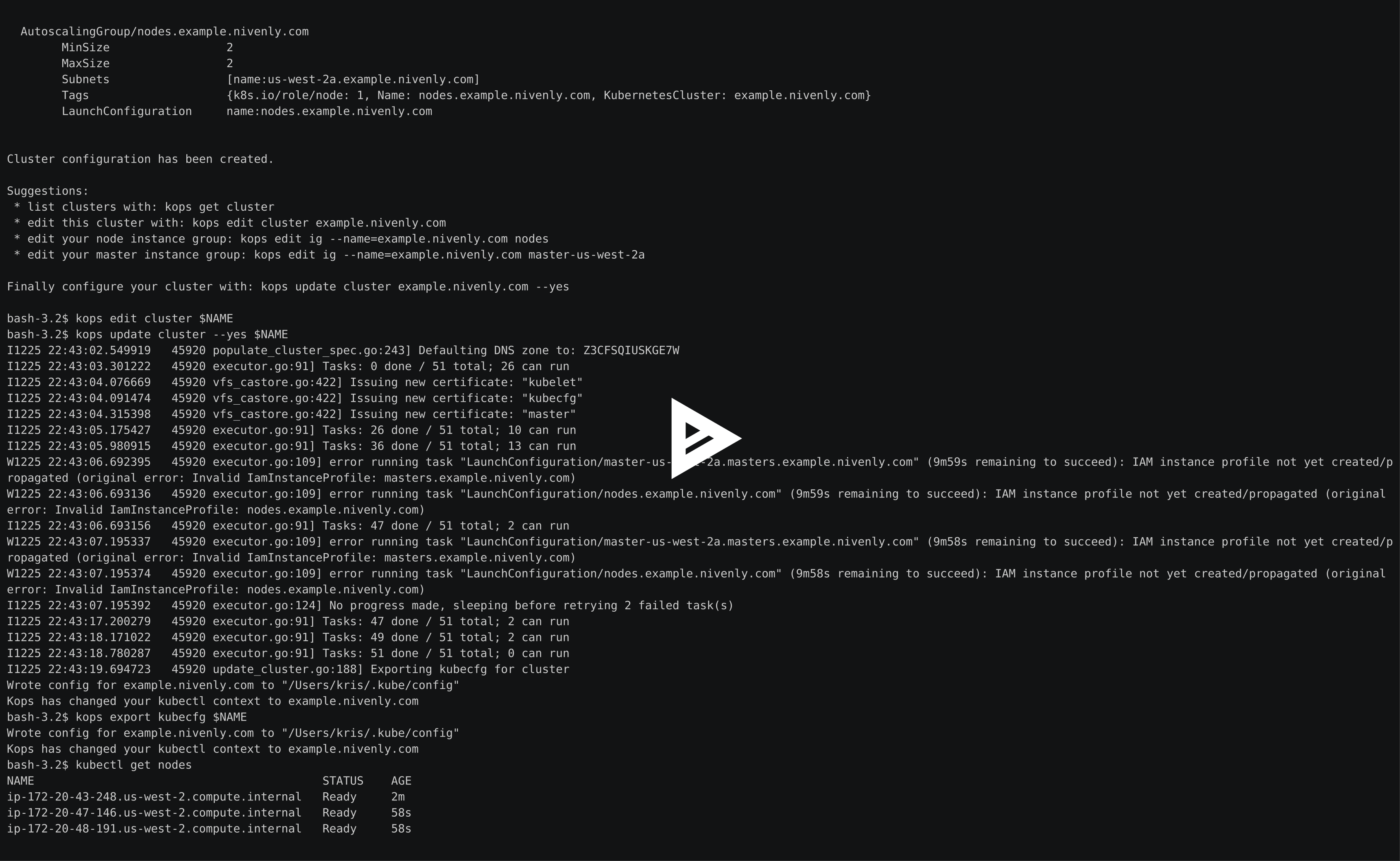 To replicate the above demo, check out our tutorial for launching a Kubernetes cluster hosted on AWS.

To install a Kubernetes cluster on GCE please follow this guide.

To install a Kubernetes cluster on DigitalOcean, follow this guide.

To install a Kubernetes cluster on OpenStack, follow this guide.

For anything beyond experimental clusters it is highly encouraged to version control the cluster manifest files and run kops in a CI environment.

Documentation is in the /docs directory, and the index is here.

kops is intended to be backward compatible. It is always recommended to use the latest version of kops with whatever version of Kubernetes you are using. We suggest kops users run one of the 3 minor versions Kubernetes is supporting however we do our best to support previous releases for a period of time.

One exception, in regard to compatibility, kops supports the equivalent Kubernetes minor release number. A minor version is the second digit in the release number. kops version 1.13.0 has a minor version of 13. The numbering follows the semantic versioning specification, MAJOR.MINOR.PATCH.

Use the latest version of kops for all releases of Kubernetes, with the caveat that higher versions of Kubernetes are not officially supported by kops. Releases who are should work but we suggest should be upgraded soon.

This project does not follow the Kubernetes release schedule. kops aims to provide a reliable installation experience for kubernetes, and typically releases about a month after the corresponding Kubernetes release. This time allows for the Kubernetes project to resolve any issues introduced by the new version and ensures that we can support the latest features. kops will release alpha and beta pre-releases for people that are eager to try the latest Kubernetes release. Please only use pre-GA kops releases in environments that can tolerate the quirks of new releases, and please do report any issues encountered.

The kops binary is also available via our releases.

See the releases for more information on changes between releases.

Getting Involved and Contributing

Are you interested in contributing to kops? We, the maintainers and community, would love your suggestions, contributions, and help! We have a quick-start guide on adding a feature. Also, the maintainers can be contacted at any time to learn more about how to get involved.

In the interest of getting more newer folks involved with kops, we are starting to tag issues with good-starter-issue. These are typically issues that have smaller scope but are good ways to start to get acquainted with the codebase.

We also encourage ALL active community participants to act as if they are maintainers, even if you don't have "official" write permissions. This is a community effort, we are here to serve the Kubernetes community. If you have an active interest and you want to get involved, you have real power! Don't assume that the only people who can get things done around here are the "maintainers".

We also would love to add more "official" maintainers, so show us what you can do!

This repository uses the Kubernetes bots. See a full list of the commands here.

Kops maintainers set aside one hour every other week for public office hours. This time is used to gather with community members interested in kops. This session is open to both developers and users.

Office hours are hosted on a zoom video chat on Fridays at 12 noon (Eastern Time)/9 am (Pacific Time) during weeks with odd "numbers". To check this weeks' number, run: date +%V. If the response is odd, join us on Friday for office hours!

We do maintain an agenda and stick to it as much as possible. If you want to hold the floor, put your item in this doc. Bullet/note form is fine. Even if your topic gets in late, we do our best to cover it.

Our office hours call is recorded, but the tone tends to be casual. First-timers are always welcome. Typical areas of discussion can include:

Office hours are designed for ALL of those contributing to kops or the community. Contributions are not limited to those who commit source code. There are so many important ways to be involved-

Although not exhaustive, the above activities are extremely important to our continued success and are all worth contributions. If you want to talk about kops and you have doubt, just come.

Other Ways to Communicate with the Contributors

Please check in with us in the #kops-users or #kops-dev channel. Often-times, a well crafted question or potential bug report in slack will catch the attention of the right folks and help quickly get the ship righted.

If you think you have found a bug please follow the instructions below.

We also use the issue tracker to track features. If you have an idea for a feature, or think you can help kops become even more awesome follow the steps below.

Package kops is the parent package for the kops kubernetes-ops tool..

GitVersion should be replaced by the makefile

Version can be replaced by build tooling

DefaultProtokubeImageName is the name of the protokube image, as we would pass to "docker run"